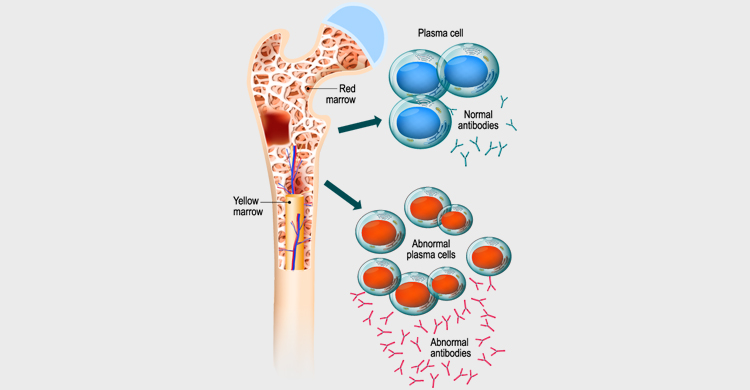 Myeloma is a blood cancer of cells found in the bone marrow, specifically the so-called “plasma cells.” Plasma cells are a key part of the body's immune system. They produce antibodies that help the body fight infection. Myeloma begins when healthy plasma cells change and grow out of control. This may result in multiple bone lesions that increase the risk of bone fractures.

The rapid reproduction of malignant, or cancerous, myeloma cells eventually outweighs the production of healthy cells in the bone marrow. As a result, the cancerous cells begin to accumulate in the bone marrow, crowding out the healthy white blood cells and red blood cells. Like healthy blood cells, cancerous cells try to make antibodies. However, they can only produce abnormal antibodies called monoclonal proteins, or M proteins. When these harmful antibodies collect in the body, they can cause Kidney damage and other serious problems. Multiple myeloma is rare, accounting for only 1 percent of all cancer cases in India. About 4 to 5 people out of 100,000 are diagnosed with this type of cancer each year.

The causes of myeloma are not known or well understood. Currently, there are also no obvious, strong risk factors for myeloma. However, it starts with one abnormal plasma cell that rapidly multiplies in the bone marrow many more times than it should.

What Are The Risk Factors For Myeloma ?

People have a higher risk of developing myeloma if they’re:

Another risk factor for multiple myeloma is a history of monoclonal gammopathy of undetermined significance (MGUS). This is a condition that causes plasma cells to produce M proteins. It usually doesn’t cause any problems. However, MGUS can sometimes develop into multiple myeloma over time.

There are two main types of myeloma. They’re categorized by their effect on the body:

An indolent myeloma causes no noticeable symptoms. It usually develops slowly and doesn’t cause bone Tumors. Only small increases in M protein and M plasma cells are seen.

A solitary plasmacytoma causes a tumor to form, typically in bone. It usually responds well to treatment, but needs close monitoring.

What Are The Symptoms Of Myeloma ?

The symptoms of multiple myeloma vary from person to person. Initially, symptoms may not be manifested. However, as disease progresses, most people will experience at least one of four major types of symptoms.

Confusion and constipation are also common symptoms of increased calcium levels. Kidney failure can be caused by high levels of M protein in the body.

Bone injuries and fractures occur when cancerous cells invade the bone and bone marrow. These lesions appear as holes on X-ray images. They often cause bone pain, especially in the:

How Is Multiple Myeloma Diagnosed ?

Routine physical exams, blood tests, and urine tests can uncover evidence of this cancer. More tests will be needed if your doctor finds signs of myeloma when you don’t have symptoms. Using the following tests, your doctor can monitor the progression of the disease and determine whether you need treatment.

How Is Multiple Myeloma Treated ?

The treatment can help ease the pain, reduce complications, and slow the progression of the disease. Treatments are only used if the disease is getting worse.

The common treatment options include the following:

What are the complications associated with multiple myeloma ?

Multiple myeloma can cause many complications, but they’re usually treatable: